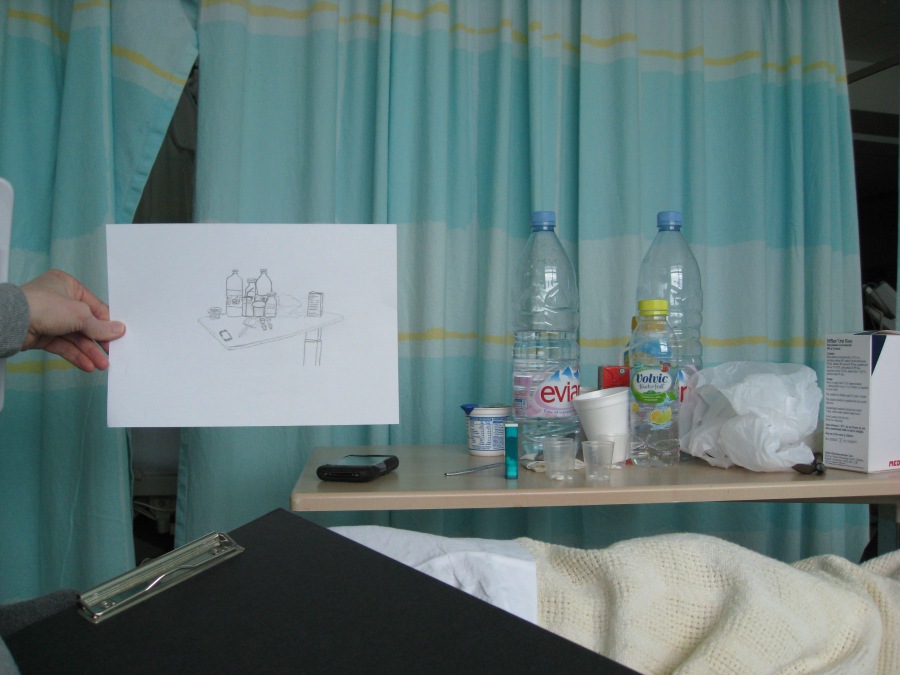 “I love the idea of your Anti-boredom Campaign when I read about it in the BMJ” – Dr James Le Fanu, writer of Doctor’s Diary in the Daily Telegraph

Boredom is normal, and often encourages us to make positive changes in our lives, such as moving onto a new job..

Prolonged boredom comes from situations where we cannot easily escape. For those unwell this can leave someone feeling miserable during already difficult and vulnerable times.  In hospitals, most rooms for adults are bare without anything to look at or do, which encourages boredom.

For children in hospital there’s lots to stimulate the mind with colours, toys, activities, play specialists, schools, charities, parents.  Hopefully a child will be a bit less aware of the implications of being unwell. For adults TV is costly, and few can focus on books. Instead being in a blank space the mind drifts to worries and uncertainty.

We are keen to create awareness of boredom as a suffering and a serious issue undermining well-being which has largely been unspoken by adults.  In bringing awareness, we are also seeking funding to explore what can be done to help. Even colourful walls, pen and paper and a bit of interest can bring moments of joy and discovery.

We hope the ABC will help patients, and support staff in their caring work.   We will share the positive difference opportunities for the mind brings but first we need to acknowledge the situation for the adult mind in hospital at the moment.   It may be hard to read, but listening is needed to bring about positive changes.

A great many thanks to all who have so kindly shared their experiences of being in hospital. Our aim is to encourage change for the better. Recognising boredom is now relevant for us all during these times of isolation.

“I  will always be grateful to the Doctors and Nurses of the NHS, they treated my infected body and undoubtedly saved my life. They treated me for everything they could see but they never saw the growing boredom that plagued a once very active mind, nor did they see the burning damage of chaotic thoughts and the growing darkness of the notion of suicide.  I found my salvation in the end but so many others are unintentionally left to become mentally ill through inactive and bored minds”

“Time spent laying in bed with no conversation or anything to do. The same things happen at the same times everyday and you become institutionalised. It gets to the point where you can’t be bothered to speak to anyone or do anything and you just get lower and lower”

“I was in a hospital for 2 years so for me boredom had become part of my life for a bit too long.  At first I tried to get rid of boredom by sleeping but as the months went past my body couldn’t “provide” any more of it. So you end up either watching the most stupid shows on TV or staring at the ceiling for hours. Boredom from my experience can drive you mental and you end up depressed because of it without even realising!”

“My time in hospital was very tedious and I had to make mischief myself!  I think boredom increases one’s perception of pain and therefore fun and fulfilling activities should be available to patients. An example for me was when I went for a week’s activity break – I was concerned about the level of pain I would endure – I got home and realised I did not endure the pain I was expecting and realised this was because of all of the activities and the constant laughter”

I am now one of the trustees of a new health initiative called the Anti-boredom Campaign (ABC) which aims to tackle the detachment and morbid lethargy suffered by patients hospitalised over long periods.

Which, in more everyday lingo, means the mind-numbing, terrifying and utterly alienating effect of boredom suffered by many people who, for whatever reason, finds themselves hospitalised, particularly for those with periods of a month or longer.

From a purely personal perspective, I can honestly say that during the 11 months I spent hospitalised, it wasn’t the pain or the surgeries or the humiliating dependence on other people to take care of the most basic bathroom needs that almost finished me off… it was the boredom.

The endless banality of institutionalised routine seems very quickly to infect every minute of your day because, once you’re admitted to hospital VERY LITTLE ACTUALLY HAPPENS.

You’re woken at 6.00 am and readied for sleep around 10.00 pm. That is a VERY long day.  And with little to distract or occupy your mind, boredom can quickly become palpable; to the point where when distractions are provided – such as exercise, physiotherapy, friends visiting – it can almost drain away any last pleasure of, or motivation to, enjoy these diversions.

Thank you SO MUCH.

“I for one know how boring it is in hospital, especially if you are in there for seven weeks like I was with family on the other side of the world, literally.  It’s often hard to sleep so the nights can be long and the days even longer.  Especially for those who don’t have visitors to brighten their day. Adult colouring books and card games etc are a great idea. Even simple board games.  Kids have plays stations etc., adult need some fun and enjoyment in hospital too.  Keeps your brain active too. They could have volunteers to play games/cards with interested patients. As an ex nurse and previous patient I have seen the effects of loneliness, boredom and long term hospitalisation from both sides” – following the Daily Mail article

“I am a geriatrician and palliative care doctor – but who also knows virtually all patients struggle with boredom in hospital.  Many of my patients have dementia and have behaviour problems in hospital when bored (such as constantly getting out of bed when doing so alone might be dangerous because of fall risk), They can’t necessarily understand when nurses explain they need to stay in bed, and just need something to do to keep them busy” – following the Daily Telegraph’s: Doctor’s Diary

“It is particularly important when you have suffered a life changing injury to be in a positive environment where the focus is on what you can do, not what you can’t do.  My experience in hospital was of no hope.  I am fortunate to have a mind set of positivity – others didn’t and were allowed to wallow in their own misery due to their minds not being stimulated.  I think the ABC is a brilliant thing – so obvious but so overlooked!”

“What you have identified in boredom being mind-numbering let alone soul-destroying is so obvious as to be irresponsible for not giving this issue the focus and importance it deserves.

I visit an old people’s home nearby and it really depressed me. That is in no way a reflection on the home and its staff because they do try to keep the residents occupied  with various activities..  But whenever I visit, the men and women are slumped in their chairs and the ubiquitous TV is always there in the background.  I never – or rarely – see the residents interacting with each others, perhaps because they cannot hear and there are some dementia issues as well.

It is against this background that I wondered whether you could suggest activities – just something, anything – I could do to improve these people’s quality of life.

There has got to be more than just sitting and flicking through newspapers or slumped over and nodding off to sleep. These elderly people are not unintelligent given the careers and working lives they’ve had, but the passage of time is dealing them a double blow, I feel: if old age doesn’t kill them, boredom will. Life has to mean more than this!” – following the Daily Telegraph’s Doctor’s Diary

Lift your spirits and get inspired..

Time is an opportunity...